Stop Missing Out on Your Own Ideas

Ideas and thoughts strike us throughout the day. Capturing the important ones (writing them down, either physically or digitally) helps retain inspiration, generate insights and increase focus.

Ideas are the foundation for any creative or knowledge-based endeavor. If you want to write a fiction book, you can take a writing class, study the classics, or read essays on James Joyce’s Ulysses. These would maybe improve your writing technique, but they won’t help you with what you want to write about. To do that, you need to develop ideas, and that’s where capturing (and later, processing) thoughts can help you.

Capturing thoughts is a skill, and as a skill it requires practice and experience to get good at it. It is fundamental in both task management systems (namely Getting Things Done) and personal knowledge management systems.

It’s worth noting that inboxes (where you dump your unprocessed thoughts) are only useful if you consistently process them, so while capturing thoughts is a skill that’s worth getting better at, it may be pointless if you don’t actually process thoughts from whatever inbox you capture them to.

1. Why is capturing thoughts important? 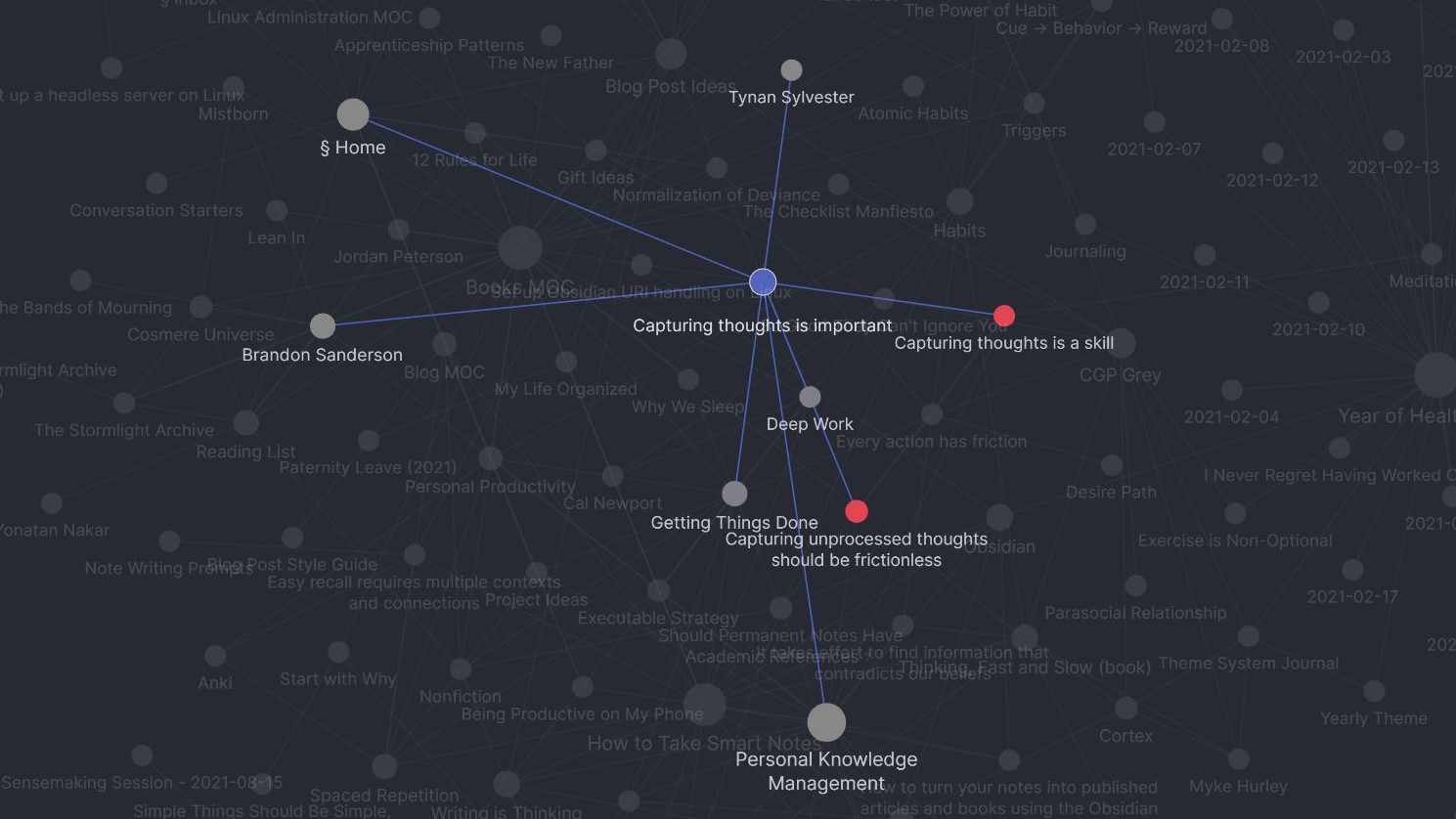 When we have a great idea, it’s tempting to assume we’ll remember it later. Unfortunately, that’s not true. We just have too many ideas a day to recall all of them. Additionally, an idea might be great, but simply not actionable at a particular moment in your life. It might require a new perspective, a different idea to mesh with (see “Synergy” below) or simply needs to incubate more. Capturing thoughts throughout the day ensures that they’ll be remembered and given more chances to spark into something actionable.

Have you ever written something in a notebook and then open it up two years later? Like, you forget about it entirely? You open up your notebook, you look at your ideas from three or four years ago and you just don’t recognize any of them. It’s like another person giving you ideas. That’s inspiration retention. You’ve forgotten the ideas. I’ve had this happen to me so many times.

So what’s good about having an ideas reservoir, that you’re always putting things in, is you capture every idea, every valuable thought from every day all the time. You don’t just capture from your brainstorming sessions - you capture from the shower, from the car, you capture from stuff you read, or movie you saw. Some of these ideas can we use years after the fact and some of them are layered. You put an idea in, it inspires another one and then you compare it to a third and they combine together into something new that goes into the game two and a half years later, that’s happened.

A single idea might be interesting on its own, but many ideas are better when combined synergistically with others. You can wait for two complimentary ideas to strike you at the same time, but you can increase the odds by capturing ideas and then comparing new ideas to old ones.

Fantasy author Brandon Sanderson says that a book is never just one idea, and that many of his books are a mashup of ideas he had separately:

I write down all these ideas. They just go in my notebook, or in my file in my computer that’s called Working Ideas right now. It’s just big lists of ideas. A book grows out of multiples of these ideas combining together.

When I have something that feels like the seed of a novel that’s working, I’ll often go back to my book and say, are there any other ideas in here that mesh really well with these ideas.

I often describe, ideas are like these little atoms bouncing around. When they mash into each other, they create some core reaction, become something new. It’s not how actual science works, but, you know, it’ll work for the fantasy author.

Suddenly you’ve got this thing growing of all these different atoms coming together and making some cool new thing that is somehow more than the sum of its parts, more exciting at least. That’s the story for me.

– Brandon Sanderson, Where Does a Book Begin for You?—How I came Up with Mistborn

If we only process thoughts as they occur to us, we limit our insights and actions to thoughts that randomly occurred to us when we were in a position to process them. Capturing thoughts separately from processing them allows us to take advantage of thoughts that come up when it’s uncomfortable to process - in the car, while waiting in line, when busy with something else.

You go to the laundromat and suddenly you think “wouldn’t it be great if there was a service that, for a monthly fee, mails you a washing machine with the quarters already inside it?”. Great idea, but you’re at the laundromat now, and you can’t actually do something about this.

If you were at home with computer access, you could maybe think about this some more, decide if you actually want to pursue this, do some market research, try to find a friend to go into the business with you. This may generate some action items you want to achieve.

Maybe this isn’t a good business idea to do some action on, but can generate some insight from it - what makes a good subscription service? Why don’t laundromats work on credit cards? Is there some economic reason? These could be good writing prompt that generate insight.

Reduce cognitive load and focus on one thing at a time

Your mind is for having ideas, not holding them.

Ever had a recurring thought that demanded attention, distracting you from what you’re currently doing? Thoughts aren’t always the sudden realization of how to solve world hunger. Even just remembering to call back someone who’s phone call you missed can have detrimental effect on focus (especially if you’re trying to engage in Deep Work).

Having a place to dump thoughts from our brain allows us to be calmer, knowing that these ideas aren’t lost, they’re just waiting for a convenient moment for us to process them. It makes it easier for us to focus on the task at hand and allows us to more quickly enter Flow.

2. Capturing thoughts is a skill 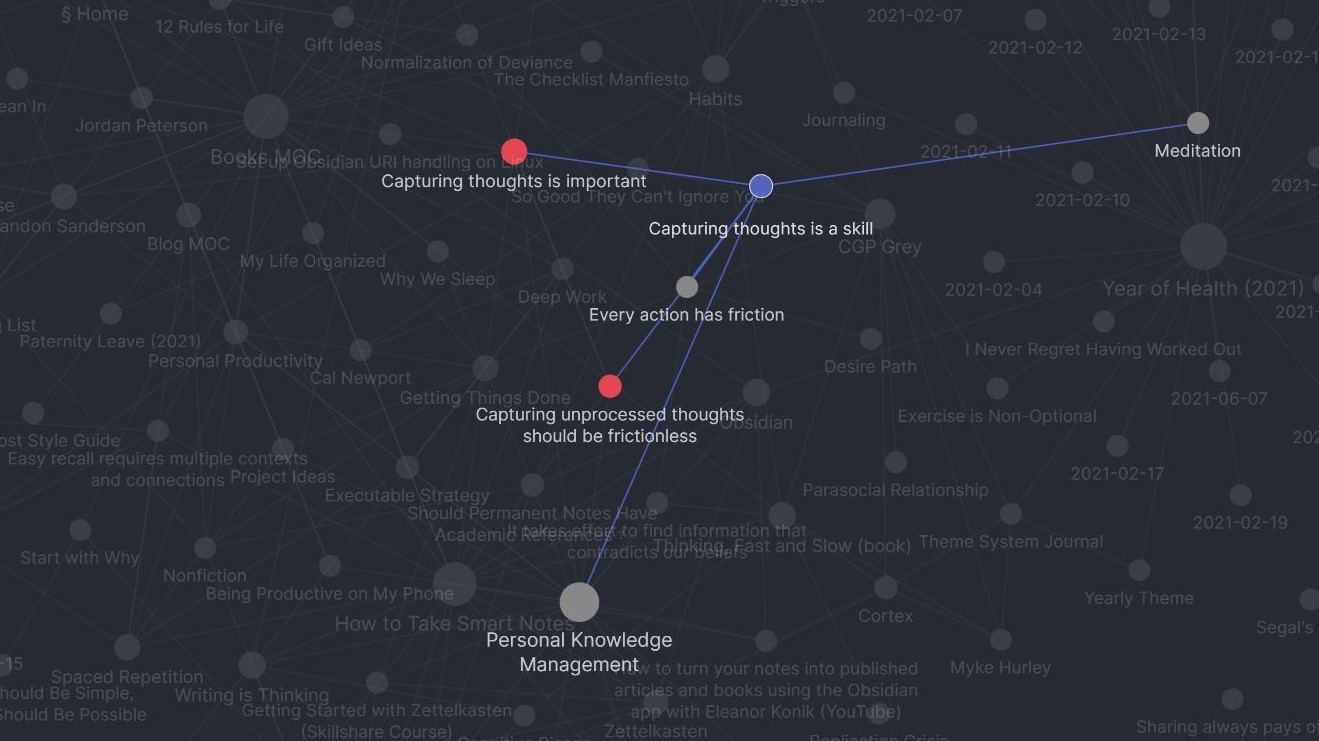 Capturing thoughts sounds easy. You have a thought - you write it down, right? In practice there are a few steps involved, and some of these appear to be skills. This is important to know because knowing something is a skill means you can improve at it.

3. Capturing unprocessed thoughts should be frictionless 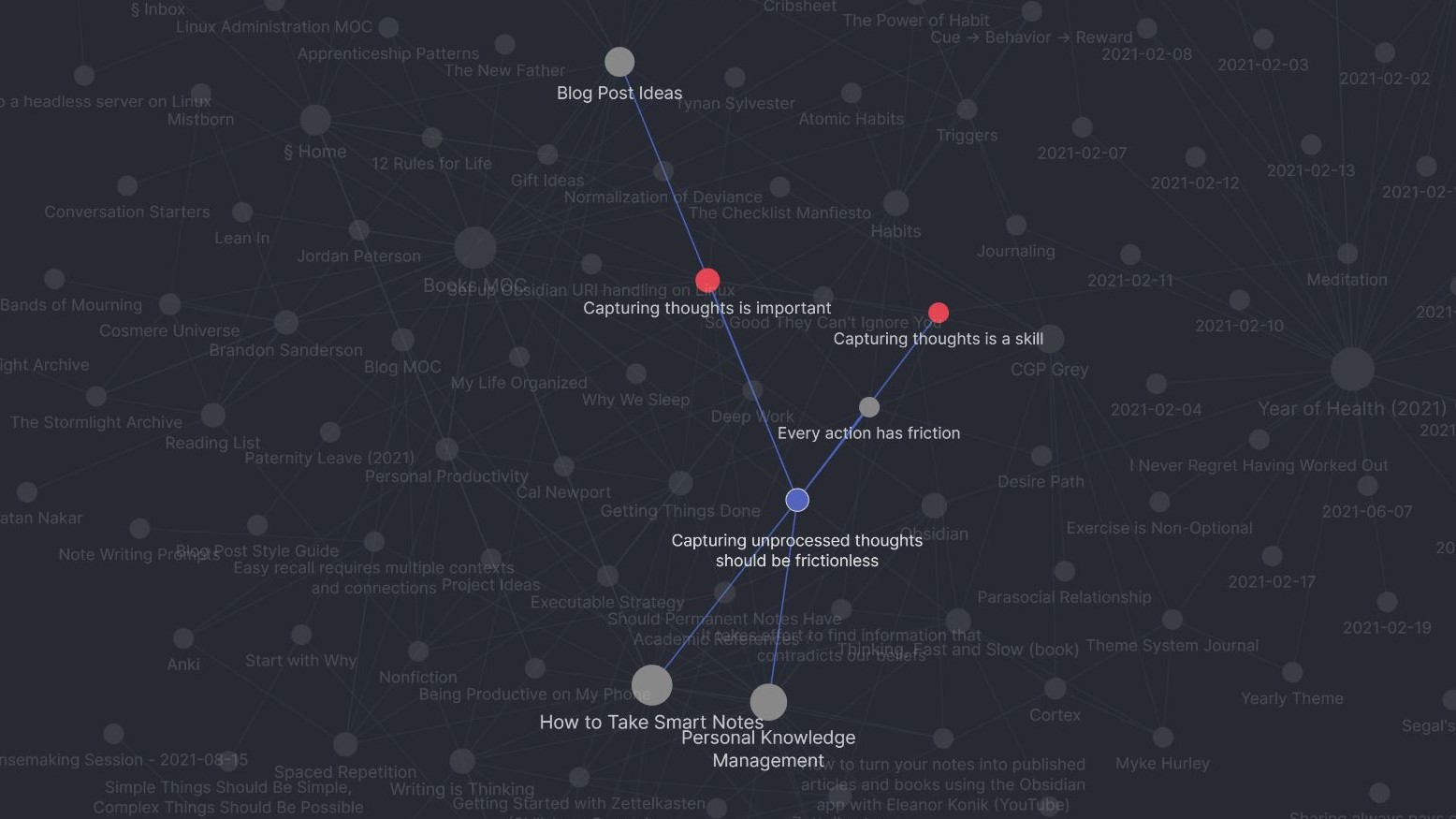 Thoughts will strike us many times a day and at inconvenient times. We need to bring the friction of capturing ideas to a minimum to ensure we’re able to do that even when we’re busy or distracted. The less friction capturing requires, the more we’ll actually do it, and the more epiphanies will be stored and used.

Say you’re working on your computer and suddenly think “hey, isn’t it weird that Family Matters started out as a blue-collar family sitcom and ended up being practically a Sci-Fi romance?”. Maybe this is an idea worth exploring - let’s capture it. Now you need to think about how to do that. You decide to email yourself. Just thinking about doing that already leaves you kinda wanting to just let this one slip. How useful would this actually be? Fine. FINE! You open up your browser, open a new tab, wait for Gmail to load… Maybe give up now? No no no, it’s already loaded, see, you can do it. Where’s the compose button? Isn’t it weird that I don’t usually send out emails but actually reply to - beep, new WhatsApp message from my boss, I just need to take a quick look and NO NO NO okay TO: amir@rachum.com subject: hmmmm, was Family Matters actually a romance? I’m not sure if this is accurate enough, maybe I need to think about this some more…

What if capturing looked like this: Ctrl+Shift+M from anywhere, type the thought, click “Enter”, DONE. This isn’t just faster. It’s so easier you would do it more. This method has less friction. And, boy, the things you can do with that idea.

In practice, capturing with less friction can be, for example:

You need something to capture ideas whenever and wherever they pop into your head. Whatever you use, it should not require any thoughts, attention or multiple steps to write it down. It can be a notebook, a napkin, an app on your phone or iPad. These notes are not meant to be stored permanently. They will be deleted or chucked soon anyway. They only function as a reminder of a thought and are not meant to capture the thought itself, which requires time to phrase proper sentences and check facts. I recommend having pen and paper with you at all times. It is really hard to beat a notebook in its simplicity. If you use other tools, make sure everything ends up in one place, a central inbox or something like that, where you can process it soon, ideally within a day.

If you’ve never captured thoughts systematically before, I hope you give it a try. Start simple - take a small notebook with you, set up a Google Doc or an Evernote account that’s accessible from everywhere. Make sure that capturing is easy. If you find yourself letting ideas go because of the anticipation that capturing the thought would be a hassle, remove some friction. Keep doing it for a while. This is like working out; you don’t see results right away. As for processing, you can start by reading the entire list every few days. If some ideas are things you need to do - extract them out to a to-do list. If some ideas are just interesting, try writing about them some more (I use Obsidian for writing, more on that in a later post). You can try sorting the list by ideas you like.

Whatever happens, these ideas can’t slip away - they’re yours to use now, like they should be.