Where I work, we have an in-house Python course that includes a few exercises. I’ve been checking the same exercise solution for a few years now, for every new programmer in our group. It’s interesting to see how a lot of programmers new to Python solve the very same problem. I get to see what each of them does differently and what they all do the same.

In this exercise, we implement and test a Path class that represents a file system path. It will be somewhat similar to the pathlib API, but simplified. The Path class is initialized with a path and provides an OOPy interface, such as nice printing with both str and repr, iteration over directory contents, etc.

For this example, let’s look at the __repr__ functionality. The exercise calls for it to behave like this:

Invariably, I get for review an implementation of this feature and one version or another of this test, verifying it behaves properly:

Since I see this over and over, I can tell you that usually, the repr implementation does not meet the required behavior. In fact, the test code above has a bug - can you find it 1?

I propose the following test implementation instead:

It’s short and to the point. The entire test is in these two lines (and only one logical line). There’s nothing else. We don’t even define any variables. The object we create, along with its explicit initialization data, is physically close to the repr result we are testing. It is practically impossible to get the repr string wrong since it is right there, in full form, on the screen. 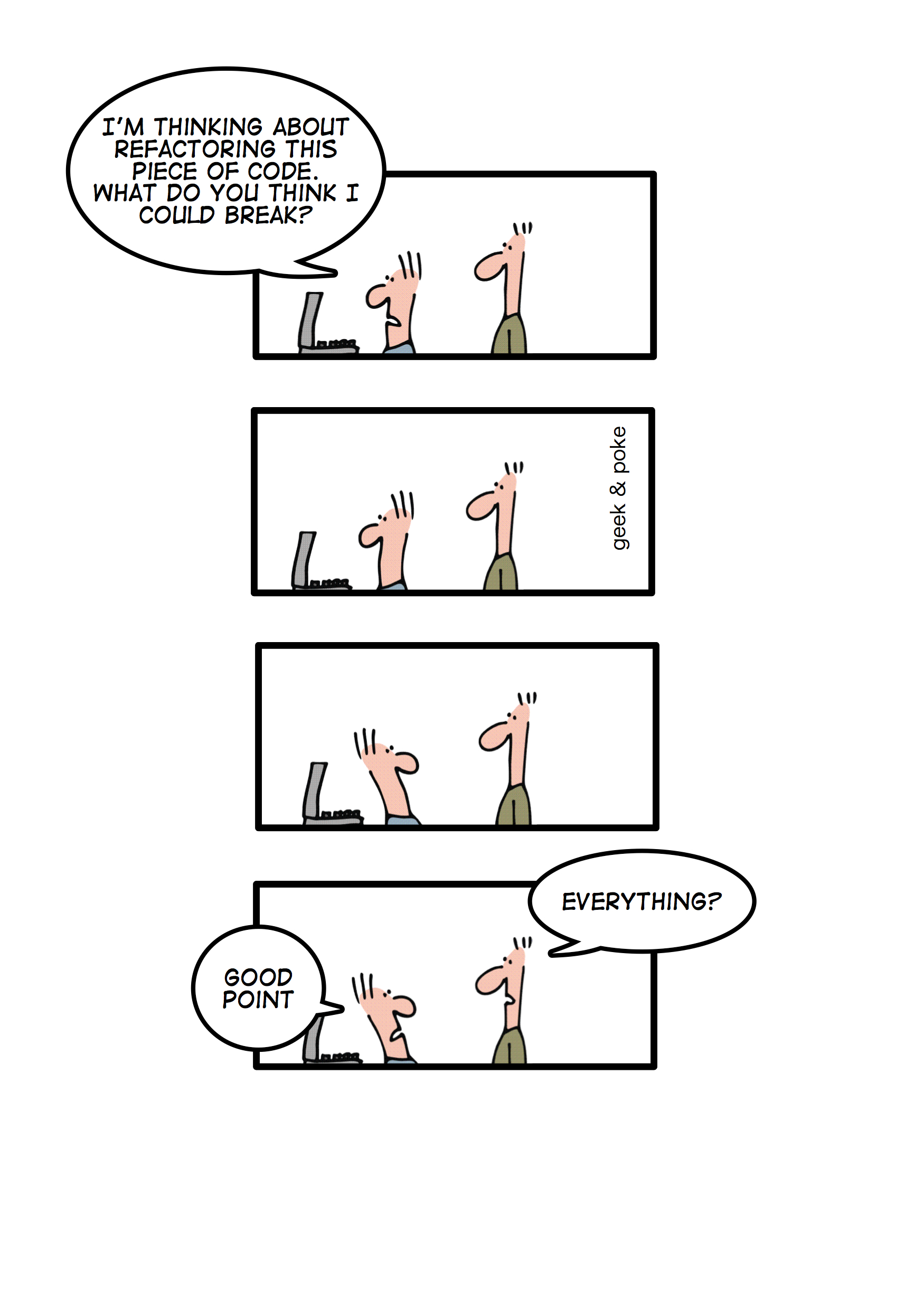 An interesting phenomenon I have observed is that it is usually pretty difficult to convince young programmers to adopt this attitude. When I suggest my version of the test to the reviewees, it is usually met with resistance. A common argument is that my version has code duplication. Let me try and rebut this argument.

Code duplication is bad. It’s bad because if you have two pieces of identical code segments and you change one of them, but forget to change the other, you’ll probably get a pretty nasty bug. This is why programmers believe in DRY - Don’t Repeat Yourself. This usually translates to a rule-of-thumb which says that “if you use the same literal twice, put it in a constant”. While this is usually good advice, a rule-of-thumb always has exceptions.

In my version of the test, the duplication is with the path string, '/path/to/file'. What’s going to happen if we change the first occurrence, but not the second? Well, the test will fail. It will fail fast, it will be easily detectable and we’ll solve it in under 3 seconds, flat.

What will happen if we use this path all over our tests, to build many Path objects? Well, nothing. If we accidentally change it in only one test, that test might fail, but it has no actual meaning across tests. The thing is, while this string appears in many tests, it is an arbitrary string, which is coincidentally the same. We gain nothing from refactoring it out into a constant, while losing readability.