From early August 2015 to late April 2016 I lost 8.6kg (~19lbs) - going down from 80.6kg to 72kg. This was not the first time I tried to lose weight or work out, but it was the first real successful attempt. In this 3-post series I will explain my method and why it worked for me.

Posts in this series:

Over the years I attempted several times to “get in shape”. I tried to go to the gym when I was in elementary school and stopped after a month. In middle school, I gave up on trying to get in shape completely and gained some very embarrassing weight. In high school I had a period where I tried to get up early in the morning for a run - that lasted about 3-4 times. Four years ago I lasted one month going to gym at my work. Three years ago I lasted two months going to an expensive gym near my house. I also started running and went to a couple of running events, but that died out quickly, just like previous attempts.

“One thing I’ve learned is not to trust myself to ‘try harder’. Trying harder is for suckers and the self-deluded. I trust the system.”

It took me longer that it should to realize that trying the same strategy again and again would probably achieve the same results. I needed a better system. I reflected back at my failed attempts to work out and tried to remember how I fell off the wagon. Whatever the exercise was, my motivation for working out behaved in a predictable pattern:

Or, to describe this more succinctly - my motivation after a workout had a high starting value and was decreasing exponentially.

The blue line is my motivation (or lack thereof). The red line is the amount of motivation I need to work out. It’s easy to see why I kept falling off the wagon. I was trying to work out without cleverly using the motivation generated by my successful work outs. My system was broken! 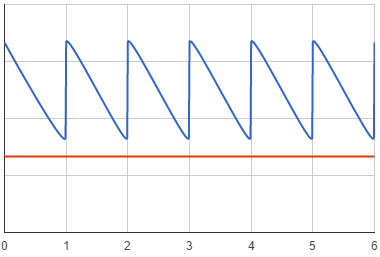 If I work out EVERY DAY, my motivation will ALWAYS be sufficient to work out again, right? Well, I can’t just do the same exercises as before every single day. I’m bound to fail. A better system is needed. Here’s what I came up with:

This might sound strange. Doing 1 exercise, even with 3 sets, is probably not going to get any results, right? Well, the point of this system is to make sure I’m not giving up - not to make me lose weight just yet.

[Jerry Seinfeld] revealed a unique calendar system he uses to pressure himself to write. Here’s how it works.

He told me to get a big wall calendar that has a whole year on one page and hang it on a prominent wall. The next step was to get a big red magic marker.

He said for each day that I do my task of writing, I get to put a big red X over that day. “After a few days you’ll have a chain. Just keep at it and the chain will grow longer every day. You’ll like seeing that chain, especially when you get a few weeks under your belt. Your only job next is to not break the chain.”

“Don’t break the chain, he said again for emphasis.

When I decided I wanted to try this idea out, I bought two 5kg dumbbells, so I could have a wider range of exercises I could do at my house without going to a gym. In the first few days I did several exercises a day - bicep curls, push ups, crunches, etc. After the initial excitement wore off, I want to give up and put yet another failed attempt behind me. What held me back from giving up was one little A4 paper. When I started, I printed out a 4-week calendar view from my Google Calendar. Each day I worked out - I marked a big red X on that day’s box. When I wanted to give up, I had maybe 5-6 consecutive days marked with big, shiny, powerful red Xs. I didn’t want to break the chain. I worked out. I didn’t do much - just one exercise. I didn’t like it, but I worked out the following day as well. And the day after that. And the day after that. After about a month, it seemed to me like I was wasting my time with these pointless one-exercise-a-day workouts, but I already had about 30 red Xs on my calendar, and I even had to print a new 4-week page! So… I did 3 exercises that day.

Soon, I started going to the gym at work. Why? Because it was a real pain to work out at home. I would need to wedge the exercise to somewhere between spending time with my wife, dinner, working on my side projects, etc. I just accepted the daily workout as a fact, and the immediate corollary was going to the gym at day time. I started out going to the gym 3 times a week. It grew to 4 and then 5. Sometimes I don’t go - but then I have to workout in the evening.

My bottom line is this: don’t try to change yourself to be something you’re not. Change your system to take advantage of who you are and what makes you tick.